Nick Cornwall is an actor, artist and educator based in the Northwest of England. His rugged looks and naturalistic style brings a gruff intensity which is truly imposing. 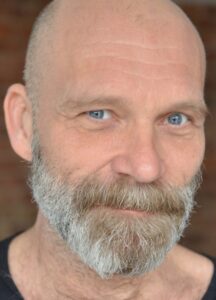 After completing the course, Nick pursued a career in stage management and regularly worked on shows, pantos and summer seasons in venues around the country including The Century Theatre , The New End Theatre , The Orchid Theatre, The Davenport Theatre and Hackney Empire.

In the 1990’s Nick gained a BA (Hons) degree in Visual Culture from Salford University and a Post Graduate Diploma in Education from Bolton University and spent several years in education before returning to acting in 2011. He spent 3 years developing his craft through fringe theatre and student films before turning professional in late 2014.

Since turning professional Nick has worked regularly on National and International TV series, films and commercials.